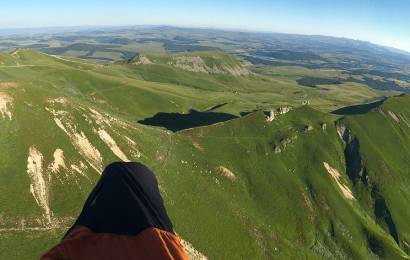 We have compiled a list of the 5 best paragliding sites in Puy de Dôme, for all paragliding enthusiasts wishing to come and practice flying in Puy de Dôme, near Clermont-Ferrand. A small classification in relation to the landscapes and panoramas offered by these sites, the flying conditions, their accessibility, their reputation, ...

Mont-Chouvé is part of the Livradois Mountains in the Livradois-Forez Regional Nature Park. It is located above Job, 80km east of Clermont-Ferrand. This paragliding site offers a beautiful take-off, in height (1460 meters), which offers a flight with a difference in altitude of 800 meters when landing at Job and 880 meters when landing at La Forie, a little lower down.

At the top, you will have a view of the Livradois-Forez Regional Nature Park and the "Monts du Forez", Clermont-Ferrand and the "Chaîne des Puys" in the distance, as well as an incredible view of the Limagne Issoire valley and the Sancy massif at take-off. A grassy take-off with plenty of space but a few rocks underneath.

It is a paragliding site which allows for magnificent pleasure or cross country flights, and which has moreover seen the start of a 132km flight in 2011.

Puy de Sancy is the highest point of the Puy de Dôme with an altitude of 1886 metres.

A little anecdote: Did you know that once at the top of the Puy de Sancy, when the weather is fine, you can see 1/7th of France; right down to the hat of Mont Blanc? Incredible, isn't it?

It is located at the top of the Mont-Dore valley. To get there you just have to take the ring road and then walk to the summit for about 20 minutes (120 meters of difference in altitude) following the wooden staircase.

The take-off can be North/North-East or South/South-West depending on the weather conditions. This paragliding site offers a difference in altitude of 700 meters with a breathtaking view over the entire Mont-Dore valley. Landing is done either at the official Mont-Dore landing site or at the resort, but beware of obstacles such as cable car cables.

Le Puy de Sancy is therefore a paragliding spot which offers an extraordinary view of the Sancy massif and a beautiful flight with a good difference in altitude, for the pleasure of all paragliders.

Le Puy de l'Angle is located in the Sancy massif near the town of Le Mont-Dore, to the east. The highest point of this Puy is located at 1730 meters of altitude. All grassy, it offers a grandiose, natural, wild setting and a breathtaking panorama.

In spite of its extraordinary setting, it is a little frequented site, because of its accessibility: since it takes about 45 minutes and 300 metres of difference in altitude to reach the summit from the col de la croix Saint-Robert. Flying there is well deserved, but you really won't be disappointed!

It is a perfect paragliding site for morning or evening pleasure flights; but also for cross-country or trekking flights, with excellent thermal performance. The take-off can be from East, West or South depending on the wind. You will fly over the Mont-Dore valley and the Chaudefour valley if you take off from the West.

It is finally one of the most beautiful sites in the Puy de Dôme, if you like to fly in a wild environment; but it has to be deserved.

Despite its slight difference in altitude of 230 metres, Saint-Sandoux is one of the favourite paragliding sites in Puy de Dôme, but is therefore quite busy. Located a few kilometres south of Clermont-Ferrand, it offers many advantages for paragliders. Indeed, it is surely the paragliding site where it is possible to fly most often during the year. In the evening, the restit' conditions are very good and calm, which allows to enjoy a few more hours of flight to get even more sensations! It is also possible to do inflation on landing (always be careful with paragliders landing). Moreover, this is why this spot is often used by paragliding schools for paragliding courses.

Even if parking is limited at take-off, it is often possible to arrange with the people present on site to make shuttles to the take-off. It is also possible to walk up from the landing area via a marked trail in 20 minutes.

Perfect for quiet flights for beginners; it is also possible, after a few thermals, to go cross-country, and make beautiful distance flights like Anthony, Freedom instructor, who made a 244 km flight in 2021: a record for this site!

It is for all these reasons that the Puy de Saint-Sandoux is one of the favourite places for paragliders, as well as the paragliding schools in the Puy de Dôme.

How can we not mention the Puy de Dôme in this top 5 paragliding sites in Puy de Dôme. The most famous of the Auvergne volcanoes, recently listed as a UNESCO World Heritage site with the "Chaîne des Puys-faille de la Limagne"!

Located just a stone's throw from Clermont-Ferrand, the Puy de Dôme has everything to seduce : easy access to the summit (on foot via the "Chemin des Muletiers" or the "Chemin des Chèvres", or by train via the "Panoramique des Dômes"), the only site in France where take-off is possible in any wind direction (the wind just has to be not too strong), a panorama and an extraordinary view of the "Chaîne des Puys", Clermont-Ferrand, the Livradois mountains, the Sancy massif and even the Cantal mountains when the weather is fine! It is also possible to make distance and cross-country flights from the Puy de Dôme (the longest flights from the Puy de Dôme are around 200km!).

Moreover, in the evening, the flights allow you to fly with an extraordinary landscape, with a low sun behind the chain of Puys and the Puy de Dôme with a red-orange sky. An incredible environment to fly in! The must!

We hope you enjoyed this top 5 paragliding sites in the Puy de Dôme! Of course, this list only lists the 5 best places to fly but you will find many more paragliding spots around Clermont-Ferrand, where paragliders also like to fly. 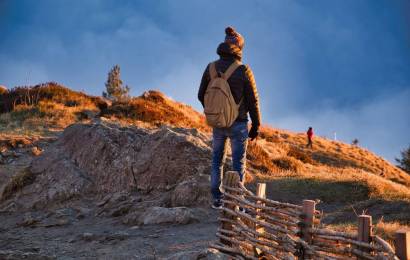 The 10 leisure activities to do in Clermont-Ferrand 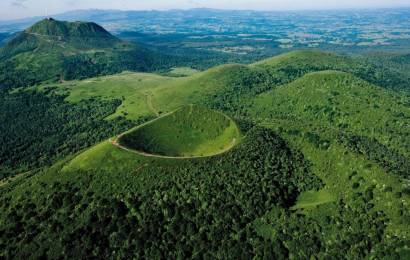