For even more thrills, the adrenaline option will allow you to experience extreme sensations like you've never experienced before! Perform tricks such as 360°, wing over,... that you will remember for the rest of your life! 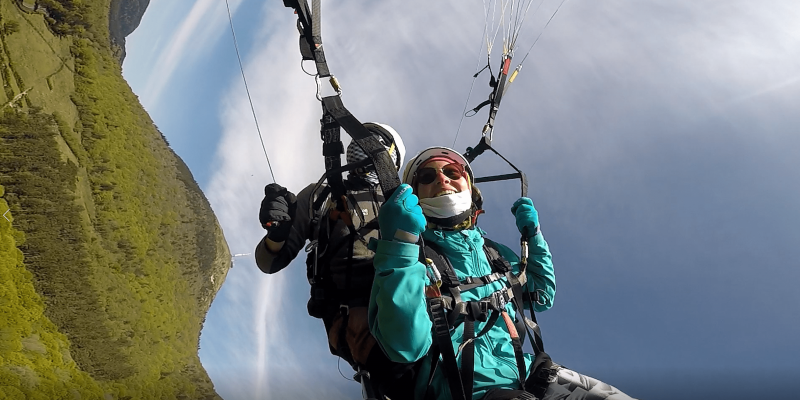 If you love thrills and adrenaline, this tandem flight is for you! In addition, the instructor will take the time before each acrobatic manoeuvre to explain the manoeuvres in detail.

In any case, the instructor will adapt to your desires and abilities so that you can enjoy your flight to the maximum.

The paragliding material is designed to withstand enormous pressure, much more than 4G! In spite of the impressive aspect of the acrobatics, everything is done safely by experienced instructors and adequate equipment! Don't be afraid and come and discover the impressive and acrobatic side of the activity.

Offer a gift voucher for a paragliding tandem flight in the Puy de Dôme to someone close to you!

Sports enthusiasts, thrill-seekers, dreamers who wish to float in the air and taste the joys of freedom could melt away in front of a paragliding flight. An original and above all unforgettable gift. Discover the different Freedom Paragliding formulas and options and choose the one that corresponds to your friend's profile. Online, you can fill in the paragliding gift voucher form. We will send it to you either by e-mail, in PDF format, directly after the payment; or by post. Your friend will only have to contact us to book the date that suits him or her.

The gift vouchers are valid for life, under the condition that you reactivate it every 12 months by phone or e-mail.

Freedom Parapente offers you options to improve your flight

The plusses of Freedom Parapente?