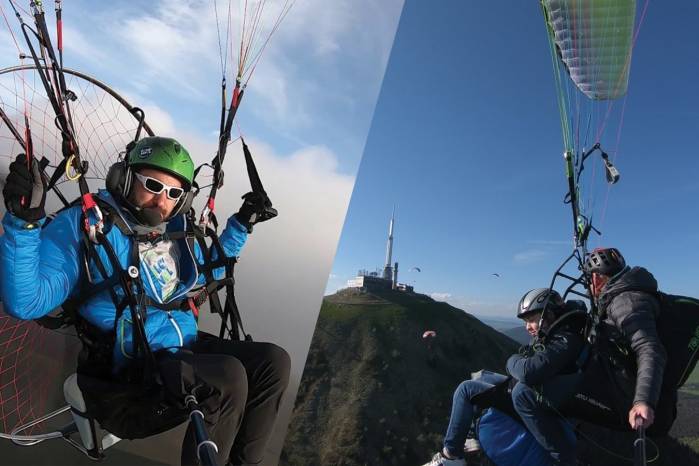 We will see that these two sports are quite similar in their history and practice. But what are the differences between paragliding and paramotoring?

Paragliding and paramotoring, what are the differences?

Paragliding is a sport born from parachuting in the 70s. Indeed, parachutists were looking for a cheaper way to practice landing (without flying) and jumping from a mountain was the best alternative they found. As the years went by, the wings became more and more pilotable and above all their finesse rapidly improved to become real aircraft capable of exploiting thermals and staying in the air for many hours while travelling hundreds of kilometres. Find out more about the history of paragliding in one of our first articles.

Paramotor was born from this combination of parachute and paraglider with the desire to take off from any open ground rather than having to do so from a mountain. Like an aeroplane engine, they had the idea of putting a motorized propeller in their back to get them off the ground.

In 1981, a German, Bemd Gärtig, made the first paramotor flight with a foot launch. The parachute wing was home-made. It consisted of 7 boxes with a surface area of 30 m2 and a weight of 10 kg. The motorization was carried on the back and weighed 21 kg. Its propeller, mounted in direct drive, was protected by a cage.

A few years later, an American, Steve Snyder, created the first paramotor in the form of a cart equipped with two motors and attached to a parachute wing of about 35m².

Today, these two types of paramotors, wings and harnesses, have developed into more technical, safer and adapted equipment for the paramotor that allows you to fly longer, higher, further and safely.

Paragliding and paramotoring are very similar due to their history. We find the same equipment (glider, harness, rescue, ...) with the only difference of having, in addition, this engine connected to a propeller that allows the pilot to take off from any clear place.

Advantages and disadvantages of paramotor compared to paragliding:

What is the difference in cost between paragliding and paramotoring?

As we have seen, there is a great proximity between these two sports. The equipment is almost identical with the exception of the paramotor.

The cost of the basic equipment: glider, harness, rescue, helmet, ... will be the same as in paragliding. Count on about 4200€ for a new one.

Then there is the price of the paramotor, which varies according to the model and the type of paramotor you choose: harness or cart. It is necessary to count between 5500€ and 8000€ for paramotor harnesses and between 8000 and 15000€ (even more) for paramotor carts.

In addition to this, there is also the cost of fuel to fly, which is not very excessive.

In terms of training, between paragliding and paramotoring, the costs to start are almost the same. 690€ for a 5-day introductory course (10 sessions) at Freedom Parapente and 1500€ for 25 paramotor sessions over the year at Volc'Envol (the paramotor school in Puy de Dôme).

Before you start, you can also discover the thrill of flying with qualified instructors who will introduce you to paragliding or paramotoring in tandem. Go to Freedom Parapente or Volc'Envol if you are in the area!

But which activity should you choose between paragliding and paramotoring?

It all depends on what you are looking for. Paragliding is going to be a sport with a greater proximity to nature. If you like to fly, you can go up to some sites by train, car or other and enjoy a simple quiet flight, exploit thermals, do some acrobatics, ... But you can also take your equipment and go hiking in the mountains and take off from a summit to enjoy a walk and a flight in the middle of nature. Paragliding requires a little time to progress and to make longer flights and will depend on the days and the aerological conditions.

If you like to fly and discover the landscape from above, paramotoring is a great alternative. You will be able to enjoy long flights without having to concentrate too much on the day's weather and thermals. If the conditions are calm, you're in for a great flight. Of course, the cost of buying the equipment is higher than for paragliding and you will need a bit more space to store it.

We hope you know more about these two sports! It's up to you to see which activity you might enjoy the most according to your desires and expectations.