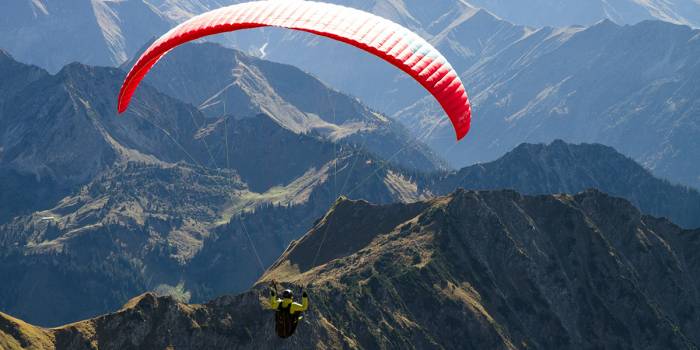 You like paragliding; this sport where the feeling of freedom, of gliding through the sky like a bird; even those extreme sensations during acrobatics, win you over every time. Discover other sports very close to paragliding that you might like to practice at least once in your life. More or less extreme sports for all tastes!

A piloting cage is a combination of hang glider and paraglider. Indeed, we find the wing without brake, nor gas pedal connected to a structure of piloting which allows to pilot the wing without creation of parasitic drag. The piloting cage was created by Jean-Louis Darlet, a French hang glider pilot, in the early 1990s. He wanted to combine the piloting qualities of hang gliding (fun, precision, elegance) with the small size of a paraglider (storage and transport in a backpack). Under this frame, the pilot is suspended from a single carabiner (of reinforced safety). The pilot maneuvers the cage by means of two lyre-shaped handles. This single attachment point also gives the pilot extraordinary comfort in turbulence. Because of the single point of attachment, the pilot can tilt the cage, and thus control the wing in both attitude (incidence) and roll. The control of the attitude acts on the speed, one swivels the lyres backwards to dive and accelerate, one swivels them forward to pitch up and slow down. The roll control allows you to turn, the hand is lowered on the side where you want to turn.

Speed-flying or proximity flying is a very dangerous practice where the goal is to fly more or less close to the ground and to play with the reliefs. It is possible to practice speed-flying with a paraglider but it is true that most of the practitioners have special mini wings with a small surface for more speed and reactivity. However, it is necessary to know how to control the wing before launching, because the proximity with the ground makes that any fall or collision can be fatal.

Speed-riding is very similar to speed-flying and paragliding. This practice associates the mini-sail and the ski. The principle is to stay on the ground while going as fast as possible with a small sail, alternating gliding and flying. Thanks to this mini-sail (between 7 and 14m²), speed-riders can access places they would not normally have access to.

The French Federation of Free Flight (FFVL), gives the following definition of this sport: "Speed-riding is a form of winter practice of paragliding. The take-off and landing, being done on snowy grounds, require to have skis on the feet. The canopies used have a surface area ranging from 8 to 12 m2 and allow alternating phases of flight and, when the terrain allows, phases of contact with the ground. "

This sport appeared in the early 2000s in France and the first school was created in 2004 in Valfrejus, a winter sports resort in Savoie.

Speed-riding is however a rather accident-prone and dangerous activity (like speed-flying) due to the speed of sliding. From October 2010 to September 2011, out of the 2691 licensed practitioners with the FFVL, 26 accident reports have been recorded, 6 serious accidents and 2 deaths.

The paramotor is an aircraft composed of a paraglider and a light engine with a propeller, integrated into a protective cage worn on the back of the pilot provides the necessary thrust for takeoff and flight. The takeoff is done on foot or sitting on a cart equipped with wheels or skis. There are one or two-seater paramotors for solo or two-seater practice (especially for first flights).

Its combination of microlight and paraglider, engine and glider, makes this practice one of the safest in its category. It can fly between 40 and 50 km/h and is very easy to fly. To do so, you just have to pull on the brakes (handles connected to the glider by lines) to orient yourself (like a paraglider) and to increase or reduce the throttle to gain more or less altitude.

If the weather and aerological conditions are good for flying, the only constraint is to fly near a landing zone for a soft landing thanks to the canopy.

The hang glider or delta wing is a free flight aircraft with a triangular canvas and a metal or carbon structure with a flexible wing.

Hang gliding and paragliding are sometimes compared, but it is still quite different from paragliding.  Because of its structure and its shape, hang gliding is a machine that allows more things than paragliding. Indeed, it is possible to fly more often with a hang glider than with a paraglider thanks to its speed which can go up to 140 km/h and to make higher distances than with a paraglider. This speed generates a more eventful take-off and landing than in paragliding, for some, a sign of insecurity and others pleasure and sensations.

Base-jumping is an extreme sport which consists in jumping by parachute from a building, antenna, bridge, cliff, mountain, ... (not from an aircraft). It combines several sports: skydiving, paragliding, mountaineering, precision landing, ...).

No need to draw you a picture, to make you understand that this sport is extremely dangerous. In the world, there are between 8000 and 10000 practitioners, 300 in France, of which about thirty are killed each year.

Carl Boenish, American, is often considered as the pioneer of base-jumping. In France, it is Erich Beaud who made the first cliff jump in 1989 and who then made and opened many other jumps and who is indisputably the great French pioneer of this activity.

The wingsuit flight is a form of base-jumping. The only difference is that the practitioners are dressed in a flexible wingsuit. It inflates with air in the first few seconds of the jump and this increases their lift by reducing their falling speed and transforming it into horizontal speed. Of course, it is always necessary at the end of the flight to trigger the parachute to land.

(Ok, we admit that this one is not too close to the paraglider!)

We hope that now you know more about the different sports around paragliding. For the thrill seekers, there are sports organizations that offer to discover these sports. So take the plunge and give yourself a big adrenaline rush!