All about the rescue parachute 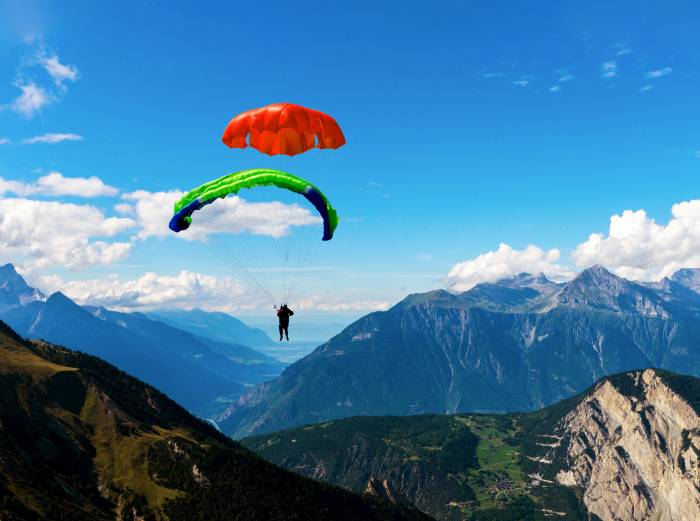 The rescue parachute is an essential element of paragliding safety and will be useful in case of (big) problems in flight. But to maximise its effectiveness, a recent packing and a good packaging are very important.

In order to better educate and train our students and clients, the Freedom team is always keen to update its knowledge, especially concerning the rescue parachute, an element that is constantly evolving.
Henri and Adrien, in charge of the paragliding workshop, therefore attended a two-day training course on the rescue parachute at the beginning of October, held in collaboration with the "french free flight federation" (FFVL) and the "National Union of Free Flight Instructors" (SNMVL). These two days favour the deepening of different packing techniques already known, and also allow to show the different packing problems, recurrent among the practitioners, to sensitize them and avoid potential future accidents. An extraction session on a zip line allows you to experience the extraction of the parachute at least once, and to remove all the taboos linked to the use of this "joker".

All the information you need to know about the rescue parachute:

How many types of rescue parachutes are there?

There are 3 types of paragliding rescue parachutes:

There is a 4th type, but really intended for aerobatics, the Acro Base System (base jump parachute integrated into a paragliding harness), and which does not necessarily replace a more conventional rescue parachute.

Which are the most effective?

There are at least two criteria to consider when choosing a rescue parachute: sink rate and pendulum stability.

Round parachutes are the most common, and have proven themselves for many years. But with a fairly high sink rate and poor stability, they are tending to be replaced by newer "square" parachutes, which have a lower sink rate and, above all, are very stable in roll. The square parachutes will offer a shorter opening time than the round ones, but to prevent them from opening too quickly, their folding hides some subtleties.

Rogallo-type steerable parachutes offer the best sink rate. If the pilot is not twisted after opening, he will be able to operate controls to steer his parachute. While this may be an attractive option, these parachutes have one big disadvantage: they are much more difficult to pack than other types of rescue parachutes. They are generally more cumbersome than other models.

How to choose the right rescue parachute?

There are different criteria for choosing the best rescue parachute. The most important is to be within the PTV range defined by the manufacturer. This is what will ensure the effectiveness of the parachute. For the record, being at the bottom of the range is better for the sink rate, a little less for the pendulum stability.

Lightness can also be a criterion for some. Indeed, there are "light" rescue parachutes (less than 1kg for small GVW ranges), others rather standard (between 1.2kg and 2kg depending on size).

Is a rescue parachute secondary equipment in paragliding?

No. Although it is not compulsory in your personal paragliding, you should not forget that a rescue parachute is a piece of equipment that can save your life in the event of a major accident. We are here to advise you and to find the most suitable equipment for your needs. But don't neglect the rescue parachute! And once again, the recent packing and the good packaging guarantee its maximum efficiency in case of problems.

How often can I use my rescue parachute?

If the opening goes well, without any shock, and the landing does not take place in a tree, there is no contraindication to use the parachute again.

Why is it important to pack and repack your parachute regularly?

What you want from your rescue parachute in case of an accident is :

Secondly, the fall rate and stability depend on the choices previously explained.

A rescue that has remained unfolded for a long time may take longer to open, especially in more complicated situations such as autorotation or parachuting. We have already seen parachutes completely glued or even a pod glued to the parachute, lines tangled, etc...

A rescue that has remained wet due to poorly stored or dried material can also age badly. It is also important to check the condition of the rescue regularly and to dry it properly for at least 3 days if you have been exposed to moisture or sand.

How often should I repack my rescue?

The minimum is once a year. Some brands recommend doing it twice.
Each manufacturer provides a manual with their parachute, and it is important to refer to it when in doubt.

How much does it cost to pack and repack a rescue parachute?

The price of packing and repacking the rescue is almost the same in all paragliding workshops. At Freedom, the simple packing of the parachute costs 50€; 60€ with the repacking in your harness in addition (See workshop prices page).

Has it been a long time since you packed and repacked your rescue parachute? For safety's sake, we advise you to do so. Adrien from the paragliding workshop is available all year round and is waiting for you at the school in Laschamps to take care of your rescue. If you are far away from Freedom or you can't move, you can also send us your material by post. All information is available on the paragliding workshop page.