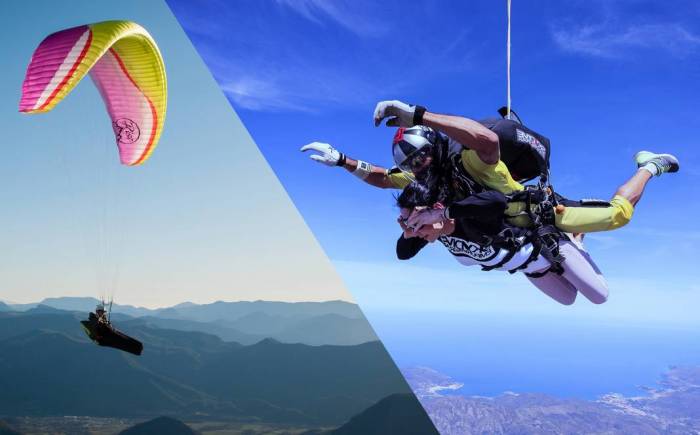 Although both sports use a fabric sail to glide through the air, they are very different in their history, their sensations and their ability to fly.

Skydiving vs Paragliding, what are the differences?

History of the skydiving and paragliding :

To begin with, the parachute is the oldest. Historical texts tell of attempts at parachute jumping as far back as 3000 BC. Since then, men have never stopped wanting to fly, like Leonardo da Vinci, and used the towers of the time to test their inventions during test jumps that were more or less conclusive but always spectacular!

It was not until the late 1700s/early 1800s that the first modern operational parachutes with a basket appeared, but it was in the early 1900s that the harness parachute really came into being. Since then, parachutes have continued to be improved from a hemispherical shape to a directional wing shape, taking advantage of better sink rates, easier packing, safety triggers, sliders that delay the opening of the canopy, in short, everything that makes a modern sporting parachute.

Paragliding is simply a derivative of the conventional parachute. In the 1970s, parachutists were looking for a cheaper way to practice landing without flying. Jumping from a mountain was very economical. The wings became more and more controllable and above all their finesse improved rapidly to become real aircraft capable of exploiting thermals and staying in the air for many hours while covering hundreds of kilometres.

What are the differences between a parachute and a paraglider?

A parachute is primarily designed to jump from a plane or helicopter, reach a maximum freefall speed of about 200 km/h in normal conditions and then open to arrest the fall and land smoothly with an acceptable sink rate. The main canopy is folded in the harness bag and opens either manually by the skydiver or automatically via a safety system based on altitude or via a mechanical system as soon as the skydiver leaves the aircraft. Initially a small parachute called an extractor is deployed in the relative wind of the freefall and will cause the main canopy to open. To prevent the deceleration from being too violent, sliders are provided to dampen the opening of the parachute. In the event of a problem, a second parachute is provided and can be deployed after the first has been released.

In skydiving, this is called a parachute jump. 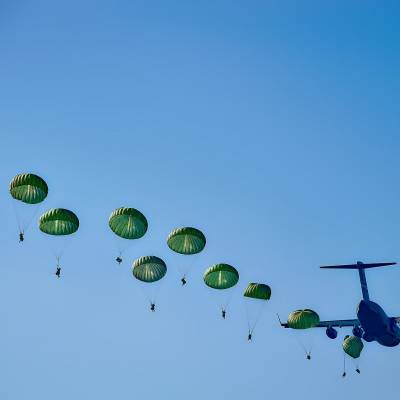 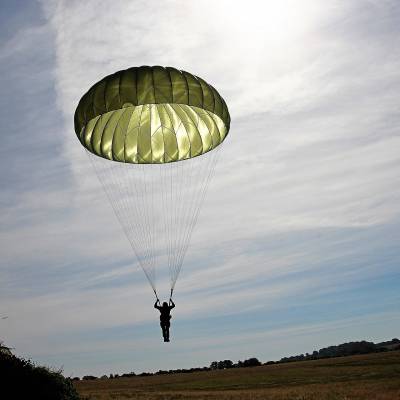 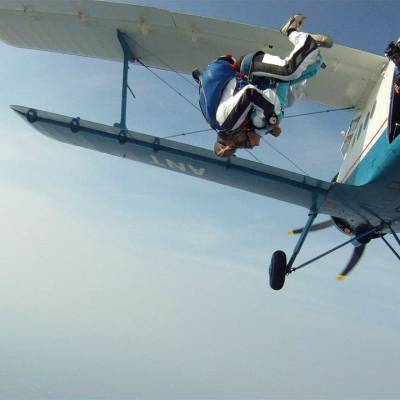 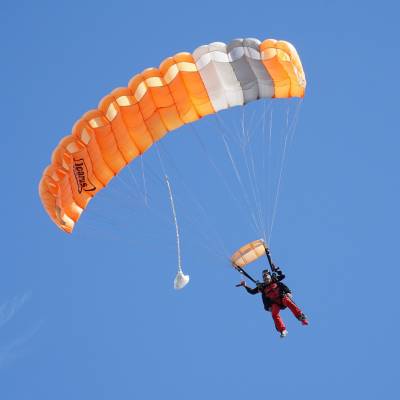 In paragliding, the objective is to glide as long as possible. The surface area of the wing will therefore be much larger for increased lift. The glide ratio of the glider will also be much better with less friction in the air. The harness used for only a few minutes on a parachute is too uncomfortable for long flights and is replaced by an open or closed harness (cocoon) in which you sit. The piloting is done with a control in each hand. The take-off is made at the top of a mountain or on a dedicated area, or from any suitable terrain well oriented to the wind. Unlike parachuting, in paragliding you fly, not jump. It is common to leave the ground and fly away before reaching the end of the take-off zone. In terms of safety, there is a reserve parachute that can be deployed if necessary, as well as a shock-absorbing system under the harness in the event of a too energetic landing (airbag system or anti-shock foam). To land, simply get out of your harness, slow down your airspeed with a nice flare and run with your wing.

Are both skydiving and paragliding equally sensitive to the weather?

Not quite! In both cases, it is forbidden to cross clouds but in freefall the thermals and the winds of altitudes are less constraining whereas in paragliding it is not possible to take off beyond 30-35 km/h of wind under penalty of taking off in reverse. Stable weather is ideal for a first flight which will then be gentler.

What are the differences in the sensations?

Here are two sports that could almost be confused and yet offer very different sensations. In skydiving, you fall in free fall and therefore almost in weightlessness. The fall lasts only a few seconds but the level of adrenalin explodes many meters!

In paragliding you have the impression of gliding through the air like a bird. From the contemplative discovery paragliding experience to the acrobatic flight that raises the G's with every trick, paragliding has something for every taste and temperament. And the flight lasts much longer!

This is another discipline which is neither really skydiving nor paragliding, but rather a device derived from the traditional parachute and modified with specific air intakes in order to create an upward suction effect thanks to the relative wind. And for that, you just have to be towed by a boat or any other mobile device, even if it is still nicer to fall in the end in the water than in the brambles towed by a quad. But afterwards, each to his own, each to his own...

In conclusion, whether you are attracted by one or the other of these sports, you will inevitably find a skydiving
or paragliding school near you in order to make a first flight and why not to become autonomous afterwards!